The dream of local businessman and race horse owner Walter Cluer, Turf Paradise opened in 1956 in a location that was only accessible by a dirt road. Over the next few decades, as the city of Phoenix went through a expansion boom, the race track became central to the development of the north side of the city. Through the initiative of track management, Arizona developed one of the largest state-wide OTB networks in the United States, and 60 years after hosting its first season, the track contiues to thrive.

Turf Paradise features a one-mile dirt oval, with two chutes for racing at 6 1/2 furlong and 1 1/4 miles distances. There is also a 7 furlong turf course, with a chute for races up to 1 1/8 miles. There is also a four furlong training track. There are stalls for up to 2000 horses. The Clubhouse dining area has room for 1000, and total seating in the three-level grandstand is 7500. 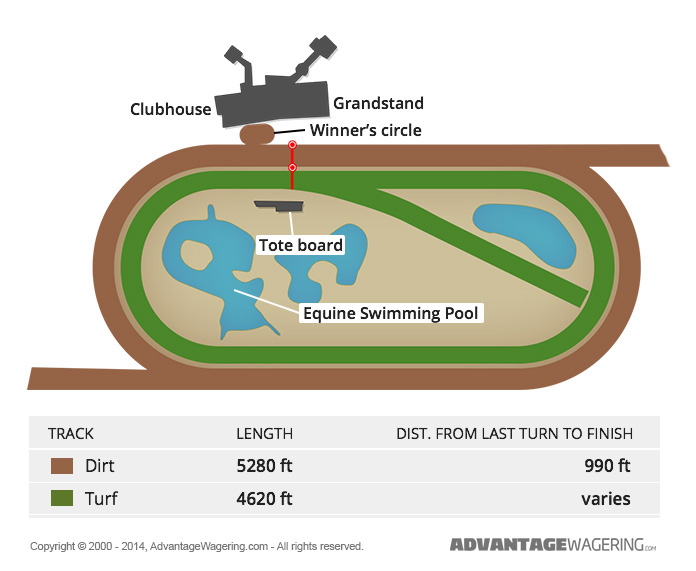 The signature event of Turf Paradise, the Derby has been run every year since 1986 and is open to three-year-old horses. In its first year, the Turf Paradise Derby was run at a mile, but that was increased to 1 1/16 miles in 1987, which it has remained ever since. The race is run on the dirt course for a purse of $75,000, and the race time record holder is  Startac, who won the 2001 Derby in a time of 1:41.72.

A race named in honoor of the late Cotton Fitzsimmons, legendary Phoenix Suns basketball coach and avid horse racing fan, the Fitzsimmons Mile is currently held on the turf course, and offers a total purse of $75,000. Somewhat unusual with signature races, the Fitzsimmons has also been run in recent years as a 6, 6 1/2 or 7 1/2 furlong sprint on the dirt track.

With almost 40 years of history, the Phoenix Gold Cup is the most storied event at Turf Paradise, and for many years in the 1980s and 90s was afforded Grade 3 status. The race is a six furlong sprint on the dirt track, and the race record of 1:06.49 has been held by Twin Sparks since 2009.

Find the best odds for your horse online and place your bets within minutes !

There will always be Kentucky Derby entrants that would be much better suited to skip the race entirely and find a better spot if not for the gusto of their well-meaning owners, but the Road to the Derby point qualifying system...